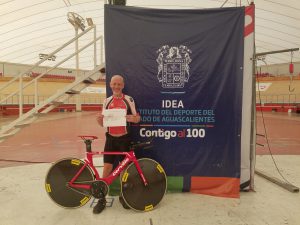 Every cyclist has some goal or goals he or she would like to achieve and I am no exception. After years of racing - hitting bottom in September 2014 with a heart disease diagnosis of obstructive atherosclerosis - I wanted more than just to be able to ride my bike again. So, I set out a series of goals to increase blood flow to my heart after stent surgery in 2014 failed to do the trick.

My first goal was just to feel better while riding followed then by restoring my ability to race at a higher level. Although I had high expectations, I did not know what to expect. However, research suggested that I had a greater chance of getting worse than better. Knowing it would take more than conventional medicine to make me better, I used my training as a scientist to seek the best clinical data to guide me in my rehabilitation. What I found was eye-opening. Nothing was ruled out. Cholesterol, blood pressure, and other cardiac drugs were considered along with meditation and a low-fat vegan diet. I was intent on getting this done and not succumbing to the path of my younger brother who died of a heart attack at 42 or that of both parents who also passed away from heart attacks. The diagnosis was grim and I thought if I could get my cycling back on track it would serve both as rehab for my heart for longevity and help my racing.  In short, a win-win.

Every year since then I got better. Working with my cardiologist at Massachusetts General Hospital, we laid out a plan of 3 different cholesterol drugs, including an injectable, blood pressure drugs and aspirin. I quit my job in the pharmaceutical industry and plowed ahead. Year after year I increased my training load as my heart healed, as evidenced by annual metabolic lab tests which showed increasing V02 and power performance. Over the last 3 years, I took a 2nd, 3rd and  5th in various national cycling events along with 3 consecutive regional championships.

After such success the bug got to me about what I could do on the world stage, that is a world record. Was it possible and in what event? In late 2017 I commenced working toward the 2k, 4k, and 1 Hour world and national records. I had to petition the UCI and USAC cycling organizations and get a real coach to help with the training loads.  And, I wanted to do this effectively and scientifically.

And so the idea was born. I began threshold training in October 2017 working toward this goal. All the time thinking “how can I do this?”. I stayed focused riding up to 20 hours a week with hard effort and recovery interspersed.

Nationals came and went with a Bronze medal in June 2018 and September was rapidly approaching.  Planning for September, I rented an altitude tent and became a hermit for the most part. Testing and practicing was my life. I received approval for the attempt on the masters Hour world record, para-cycling C5 4k national record and the American paracycling Hour world record which would occur concurrently with the master's record.

My wife and I few to Aguascalientes on September 16th for both extra practice time on the track and more time to acclimatize to the high altitude. There is an advantage to ride at altitude for most people but not everyone. Some can’t deal with the lack of oxygen and hard efforts. My ace in the hole was that I knew I was good at high altitude.

My first week was set with more testing to see if I could sustain the speed at altitude and it was ok but could only sustain the 30.7 mph to break the world record for 10 minutes at a time and my heart rate was higher than I could take for an hour. I hoped it would get better day by day. Always on the edge, I just relied on hope. 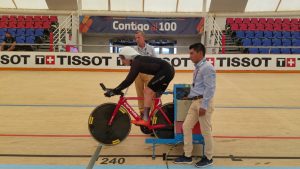 Racing began on Saturday and ended on Tuesday.  My schedule as the 2k masters WR attempt on Saturday, 4k para national record on Sunday and the Hour WR and national para record on Monday.

The 2k is very technical with respect to pacing and energy management. This was only my second race at that distance and I came up only 3 seconds short. You can’t try this twice in a day so I bagged it and looked for Sunday’s attempt next. The 4k is double the distance but the same applies, pacing and special training are necessary. Again I fell behind by 5 seconds for the national record.

Ok, now the pressure is really on. The WR for the hour. I get locked in the blocks for the start and the adrenaline flows. I start and am on pace for 12 minutes and the world record looked like a possibility but something was wrong. I began to fade and fade fast so I recalibrated looking to lower my pace to the para-cycling WR distance but could not maintain that either – so I stopped. 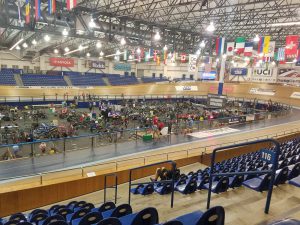 I was told that the schedule was tight and I would not have an optimal time to go again so it was suggested by the event director that I restart. Now I had already done 20 minutes of hard effort but I wanted to at least set the national Hour record for paracycling and in order to do this I had to complete. So, I did restart at a much-reduced pace….and it was brutal. The temperature in the velodrome - which is not regulated - rises to over 90F in the day and it was getting close. Also, it became painfully apparent that I did not have the practice on this special bike to maintain an hour in such an uncomfortable position. In addition, on a steeped track, your experience close to 1.5 g’s in the banks.

In other words, you are 1.5 times heavier about half of the time you are on the track. This affects your neck and sits bones with extra pressure. I began to get bruising on my inner quads from the saddle and could hardly peddle. But I pushed through with incredible agony. I am now near 80 minutes of an hour attempt. Who does that! Someone without a lot of experience. I was dying. I finished. There is a final bell lap and no matter where you are on the track you still have to finish the lap after the whistle is blown.  My right leg began to cramp and since you can’t coast or freewheel on a track bike, I was worried about crashing!! My leg was locking up at 30 mph and I was losing control. There are no brakes either. I called out to my wife who was supporting me to “catch” me - which she did. The standby paramedics ran up and I was stumbling to stand as my leg was locked in a solid cramp. Eventually, we got the cramp out and I began sobbing. I cried more in this attempt than I did in the last 10 years. I was balling. A year or more of hard work ended in a much-diminished effort but I finished and the record was written. I was off to drug control. And after peeing in a cup, back to the hotel.

I was devastated.  45.7 kilometers was almost 4 k less than my goal but it was done till whenever I decided to torture myself again. However, during my shower, I decided to try again. THE NEXT DAY! Yes, I had one more opportunity before I had to return home. The officials would be gone along with all the support staff. But the only time open on Tuesday was midday and it would be hot really HOT! I wanted to give it a try. So I emailed the organizer and it was set. I would go after another athlete in the morning.

I started around 1 PM the heat index was in the mid 90’s; terrible for an Hour attempt. Charging onward, I began my attempt. My goal was to establish an American for paracycling record equivalent to the world record time of 47.55k. Since my saddle was so BAD I purchased one from another athlete, who just set the WR for 45+ age group at 31mph. You're not supposed to change saddles before any ride, much less one like this, but I had no choice. Just before the start, I adjusted it as best I could. It felt much better.

My neck and rear were so sore from the previous day that I could hardly take it. The g-forces and lack of track time took their toll. I was on para WR pace for the first 30 minutes. And then the walls came crashing in again. Oh no I thought, I won’t be able to finish?! During the hour it is best to drop the pace all at once and then try to revive instead of steadily fading all the way to the end. I tried, but this time the saddle was hurting me in different ways. The new saddle had ZERO padding. The pounding of gravity was causing a feeling akin to sitting on nails. Ouch! My wife is writing whiteboard messages.  “20 minutes left”, “just stick.” These minutes tick of like hours. I kept calling out to give me the time left. I could see my lap times displayed every lap but not the elapsed time.

Despite continuing to fade, I came out ahead by close to full kilometer. And set a new record:46.52 kilometers or almost 29 mph. I was overjoyed! This record will not be easy to break. Back to doping control. Pee in a cup and out to party!!

Lessons learned. After meticulously preparing my aerodynamics, tires and aerobic training what I failed to train was my positional fatigue. That is to say, sitting in the exact same uncomfortable position on a track at high power for a long time. This is what took me out in the end. Track racing is SO different from road time trials because you can stand, you cant coast and you experience significant g-forces for an hour. I also should pick one record NOT 3 in one weekend! I overestimated the difficulty.

I am already thinking about my next attempt.