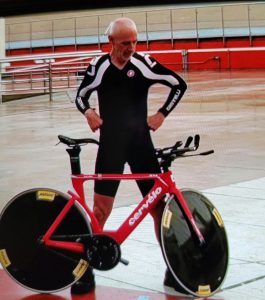 After setting the para C5 national record in 2018, I set my goal to best the current world record for the 60+-year-old when I turned 60. However, life has its challenges. After overcoming a near-fatal infection in 2019 followed by total shoulder replacement surgery and, of course, delays because of COVID-19, I was unsure of when and if I could do it!
Last year, in 2020, I figured I would start intensive training regardless, even though all the indoor velodromes were still closed due to the virus. My training started well, and I was improving to the point where I was approaching the power and fitness, I saw in 2018 when I was 58. I am now 61. This was a good sign!
I did some early races and, in May of 2021, won a time trial with power equal to my 2017 race at the same venue and time of the year. So now I was very motivated and said to myself, "Game ON".
Later in May, I took 3rd in a hill climb time trial up the Kancamagus Highway and was further encouraged that things were going well – until I had a severe crash in July…

I broke the part of the hip where my femur inserts into my pelvis called the acetabulum. I was devastated and had no idea if I could continue. My doctors said I should heal okay, and the fracture was clean through the pelvis but non-displaced. I was allowed to ride a trainer for six weeks without resistance, but only 96 days before my record attempt. I thought how dumb it was to keep trying as it all seemed so impossible – especially without knowing the recovery time.

Healing would be, for me, a pain-limited effort. I couldn't walk for about a month but put more and more weight on the leg over time. And I did a time trial race 1-month post-crash and took 2nd. But ironically, I was still using crutches!!

Now the stage was set…I kept training and decided to go to Aguascalientes, Mexico, to an indoor (velodrome) track to attempt the world record with the USA national record as a backup. The world record had just been broken in August of this year, and 1 kilometer was added for the hour. This would make it much more difficult. Even though my training was progressing, I was still shy over 10% of my projected power needed to break the world record.

I continued intensive training, hired a track coach, and went to Mammoth, CA, to train at altitude for two weeks. Although this wasn't long enough, I needed some boost, and this was it. I slept in an altitude chamber for 3 months and hoped this would add just enough to get me to a higher level.

Unfortunately, I went backward! My fitness seemed to drop until I went to sea level; then, I had a big boost and was hopeful.

The big day was nearing, and I arrived in Mexico 3 days before my attempt. Testing on my first day was encouraging with my lap times exceeding the current world record with ease – was now very nervous. Before arriving, I was settling into the idea that I was here just for practice and data collection.
Racing at altitude, mainly if you are not used to it, is a different ball game altogether!

As the day came near, I began to have the worst nerves of my life! I couldn't sleep, and the next day, I felt a sense of doom and actual panic. In all my racing years, I never felt this bad.  Of course, this translated into a terrible performance and stopped my effort some 40 minutes into the hour. The hour time trial is the total distance covered in precisely an hour instead of most races with a set distance with the lowest time winning. Although some joked that I won the record because I finished the hour in 40 minutes- that's NOT how it works!

Now it was time to regroup and think about tomorrow. I had one more chance before the officials left us and went home. The UCI, an international cycling body, oversees these events and several officials were on hand to weigh and measure the bike and time. We also had EMS crews on hand in case of a crash or other critical medical issues.

Thursday, October 14 at 12:30 PM, I'm on track about to start again, this time with the national record pacing drilled into my head. We do lap times and counting laps to judge where we are as bike computers are not allowed for good reason. One has to ride the lower black line as close as possible with four turns per lap… that's four turns for every 250 meters. You get dizzy after an hour of this!!

I didn't understand then and found out later after analysis that the hot temperatures on the track would be my flaw. I was training in Massachusetts and New Hampshire, where, at this time of year, the outside temps were in the 50's; I had no heat tolerance for the 80F + temperatures. And as it turned out, my testing on Monday occurred when it was 73F and only for 16 minutes. – I was fooled and overconfident!!

On my second attempt, I was less nervous and more confident that I could do this!  I was clicking out times below the 20 seconds needed to break the current National Record and felt good. Unfortunately, an hour is a long time, and at 40 minutes, I began to fade – and fade fast. I was bleeding time at 1 to 2 seconds a lap and was unsure how much I could lose and still break the record – OMG is this going to happen again- am I going to fall short? After a year of trials and tribulations, from infection to breaking bones- am I going to leave Mexico with just memories and data….I just didn't know!

As the finishing time neared, so did my impatience. I was in severe pain on two fronts, my sit bones were seemingly being crushed under the weight of my body (because of the steep banking of the turns, you experience significant g-forces every lap), and I couldn't find relief. First, I tried adjusting my position a little, which is nearly impossible when you are trying to stay on a 2-inch black line, and any movement in the body can cause more aerodynamic drag, which will slow me. The other issue was pure exhaustion; when I should have been doing long endurance rides and working on my fitness, I was on crutches and recovering from a broken hip – I just didn't have it, or at least I thought!!

And so I continued, losing time at a rate that looked like all the effort was for nothing. Technical rules didn't allow for cumulative distance updates, so I really didn't know. The crowd began cheering louder and louder as I approached the 1-hour mark. Now it was 5 minutes to go…I was dead… with no energy, in pain and weaving all over the track just trying to finish…praying for the bell and the gun. In this race, you get a bell lap when the officials predict the hour is spent and a gun when the hour is up, even if you don't cross the finish line before then. However, for official timing, you have to complete the lap at speed. So it is the only race where you have to keep racing when the race is technically over – albeit for only a few meters. 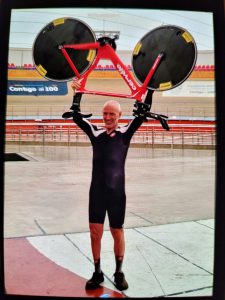 I complete 44.935 kilometers or 27.9 miles for the hour.
Emotions began to flow before I finished and cascaded after. After all the time, effort, and pain of training and completing the event, I couldn't contain myself. It was now over, and I am now in the history of cycling records. Thank goodness it's done…
Now I'm off for drug doping tests and resting up for next year…yes, I will try this again…go figure!

My gratitude and thanks for my wife Maria Papola Megdal's support and excellent care throughout my training and race. She carried equipment, gave lap times and love, and more while never doubting me.  I would also like to thank the many friends I made at the event and Juan Carlos Esparza. Without his help, the event would not have happened; he was the Mexico concierge and did everything necessary for across-the-border coordination. And to thank Aron Seiken for all his support and coordinating the USA side of my record attempt – Aron also set several world records in the sprinting distances, so congratulations to him and all the other athletes who made attempts this week.